That car is fast!!

AMAZING I CAUGHT UP WITH HIM!!

all the credit is going to dean for this..

First try of Dave's new smoke system...
You can see how well it works on the ground but I just could not keep the camera on it while it was flying high - sorry Dave I did try.

Posted by Anonymous at 11:25 No comments: 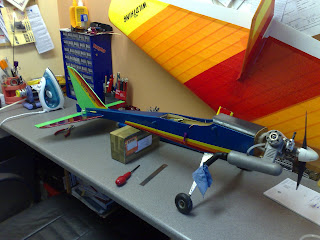 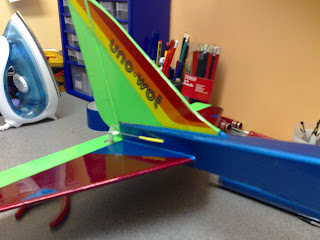 Finished putting it back together, I used elastic bands and sheet rubber as I think it will be more durable. Roll on the weekend !!!!!!
Posted by dszabo at 19:49 6 comments:

Hmm, Looks like theres going to be a squadron of them.
Posted by dszabo at 17:36 3 comments: 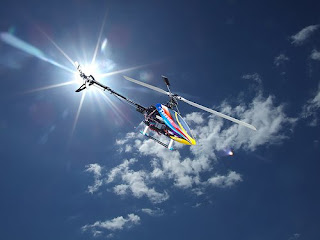 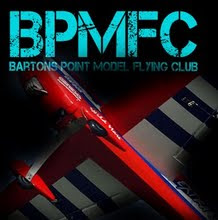 Like this one best, your IT department is well good Slippery.
Posted by dszabo at 17:56 3 comments:

Posted by cougarkid at 18:16 No comments:

Not much lift and had to fight to get out into the open air.
We all got battered in the bumpy air - you can see this clearly on the video.

Posted by Anonymous at 22:07 No comments:

Posted by slipperywhenwet at 11:28 No comments:

Lots took place both on and off the field...

Posted by slipperywhenwet at 23:36 3 comments:

Boys from the green stuff

Posted by slipperywhenwet at 20:29 2 comments: 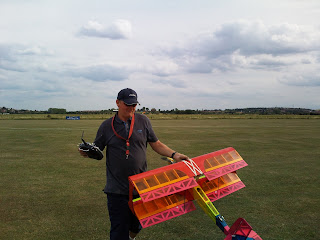 Posted by Anonymous at 22:36 No comments:

this one big enough for ya????

Posted by Anonymous at 21:51 No comments:

Found this on my phone. Guess who
Posted by markelly at 22:49 4 comments:

The glider was now ready for its true maiden flight off the hill and it did not disappoint.
Dave Monk was the original builder of this glider - I tried to find out about the gentleman and his model via the SADMAC club. Although I made contact by phone and email and was told they would get back in touch no further information was forthcoming - A shame because I understand Dave Monk was a force to be reckoned with in his day - and was a member of that club...
His name is still inscribed on the gliders wing - and there it will stay.

The thermals and sink were very strong when I flew it for the first time at Detling on Friday 3rd July and even with the one Metre x 12mm thick carbon spar fixed into the wing you could see the wings flexing.
The glider has an excelent speed range and does not tip stall - till after you think it should have done so - nice.
I hope I can keep it in one piece long enough to do Dave Monk justice - lightning man might strike me down otherwise...

_ This was before the paint job shown below - Thanks to Little Steve for doing the video...

This was it's first real flight at Warden (Thurs) after a quick glide test at Minster the day before.

Not much wind but it few well with reasonable control.

Now time for a paint job...

Labels: Need to build a flying nest next...

cannot stop laughing at this 1

Posted by Anonymous at 23:01 No comments:

The Bird - on going. 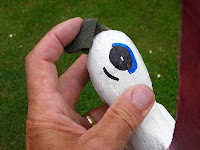 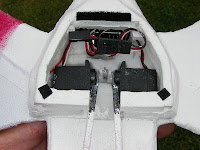 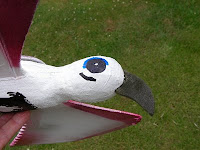 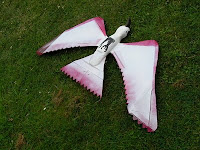 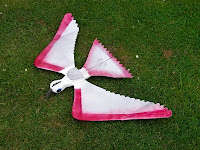 I have now painted the beast - decieded not to try and paint it up in the real colours of any bird as I am no artist so that would have been a dead loss so I have done a paint scheme that I hope will give other birds a scare and look OK to me in the air - well at least I wont be flying the wrong model with a bit of luck...


The beak was most important and being at the front it would snap off so soft black sponge was used which should take a few knocks before it falls off...

The model does not soar very well and now the paint has been added the weight has gone up a lot so it is yet again an "unknown commodoty".

I hope it will fly again as it looked good in the air - would have had a small video but it has not come out - better luck next time...
Posted by Broken Wing at 14:30 No comments:

The grass has been cut Trevor get your Jets out.
Posted by slipperywhenwet at 00:09 No comments: 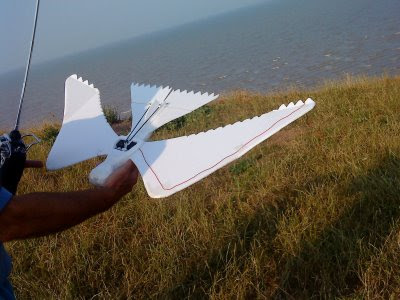 Built a new model on Tuesday evening and tested it out at Minster on Wednesday - it would glide and the elevator worked but it had no directional control...
The test showed at least the basic concept was sound so it was just a case of sorting out the bug...
Back to drawing board to sort out how to get the directional control sorted. Re-designed the tail section in the evening and tested it out at Warden tonight.

IT FLEW AND I COULD FULLY CONTROL IT.
OK for starters - may try another if this lasts a while...
Posted by Broken Wing at 22:43 2 comments: 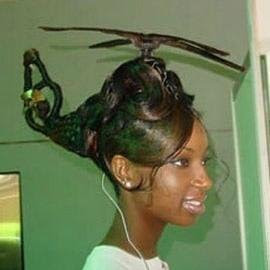 Not sure but I think its called the "swirl top" :-) pmsl
Posted by Baby Bertie at 03:19 No comments: